Een aanrader!
Posted by Stef at 8:12 PM No comments:

Spitsvondig en geestig.
Posted by Stef at 8:12 PM No comments:

Email ThisBlogThis!Share to TwitterShare to FacebookShare to Pinterest
Labels: Will Self 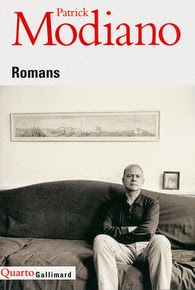 Een luchtige aanrader.
Posted by Stef at 10:21 PM No comments:

"We live on the flat, on the level, and yet - and so - we aspire. Groundlings, we can sometimes reach as far as the gods. Some soar with art, others with religion; most with love. But when we soar, we can also crash. There are few soft landings ... Every love story is a potential grief story. If not at first, then later. If not for one, then for the other. Sometimes, for both".

"We go in dreams, and we go drown in memory. And yes, it is true, the memory of the earlier times does return, but in the meanwhile we have been made fearful, and I am not sure it is the same memory that returns. How could it be, because it can no longer be corroborated by the one who was there at the time. What we did, where we went, whom we met, how we felt. How we were together. All that. 'We' are now watered down to 'I'. Binocular memory has become monocular."

Some books require to be simplified and to become part of any school curriculum. This is one of them. Joshua Green is head of the Moral Cognition Lab at Harvard University, and with "Moral Tribes", he has written one of the most significant books on morality of the last decades.

Green first describes the biological foundations of our morality, with first the defense of the "I" within the group, with all mechanisms needed to survive within a social context. Then he moves on to discuss the importance of group morality, the biological reflexes to protect the own tribe against neighbouring and competing tribes.

This is the kind of default positions for humans, a kind of automatic moral response against the others, which is often rationalised afterwards (they are evil, they have no sense of justice, etc.), but which is in essence a deep emotional and pre-rational response.

Luckily, we humans can also revert to "manual" response, when our brain can take over and think about what will provide the most happiness for most of us. In that sense, Greene belongs to the school of "utilitariansim" of John Stuart Mill and Jeremy Bentham, which he would rather re-define as 'deep pragmatism'. The advantage of Greene's approach is that he has done extensive tests of people in a variety of moral dilemmas, looking at the statistics of behaviour and motivation of different test set-ups and thought experiments, such as the prisoners' dilemma or the trolley dilemma, the latter offering someone the choice wether they would push one person under a trolley to make it stop and hence avoid the death of five other people down the tracks. In fact, very few people will do that, but the majority would willingly turn a switch to re-route the trolley on a side-track, killing one person in the process to save five. Why would they do that? The fact that he looks at all these varieties and possibilities of choices and people's response to it, is not only an eye-opener, but framed and explained by Greene also illuminating to understand our most unconscious reactions and moral behaviours.

Greene stears us clearly outside of the traditional moral positions of collectivism versus individualism, and he manages to come with a quite compelling proposal consisting of six rules :
1. In the face of moral controversy, consult, but dot not trust, your moral instincts
2. Rights are not for making arguments, they're for ending arguments;
3. Focus on the facts, and make others do the same
4. Beware of biased fairness
5. Use common currency
6. Give

Each of these rules get ample attention and explanation in the book.

"Moral Tribes" is a fascinating exploration of our morality, and quite a convincing and highly readable one. As said at the beginning, how do we get thoughts like these known to broader audiences? Greene's proposals are definitely worth hearing.

Bruce Hood is a British experimental psychologist at Bristol Universiy, who specialises in developmental cognitive neuroscience. In "The Self Illusion" he gives a sweeping overview of the most current thinking on the workings of our brain and the illusory perception of the 'self'.

He explains how our brains work, how the neurons interconnect, how memory is created and stored, and then finally how the brain creates a narrative around these memory to give it a sense of continuity and overall framework. This 'self' is, according to Hood, a fiction that may change dramatically depending on the situation (eg work vs private environment) or the different phases in life. The same holds true for free will, which is also a conscious creation of brain cells and neurons at work in the background, and the post hoc rationalisation is nothing more than a narrative for what's happening unconsciously. A quite shocking statement for us who so strongly believe in our own rational powers and strong personalities (including your humble servant).

Yet Hood's explanation, his rigorous documentation of own research and of cases presented by other scientists is quite compelling, especially now that brain scans can demonstrate that our brains decide several seconds before we make a conscious decision.

Many of Hood's examples and extreme cases were already mentioned in other books on the same topic, such as the ones by Oliver Sacks or Daniel Kahneman, yet at the same time, it's good to have them again in a very accessible and even entertaining book with a very comprehensive overview of today's cognitive science.

Armstrong wil een spirituele samenleving creëren op basis van mededogen, en van de bijbel ("The Bible 'proved' that it was holy because people continuously discovered fresh ways to interpret it and found that this difficult, ancient set of documents can cast light on situations that their authors could not have imagined").