In a world of post-truth and alternative facts and fake news, this book is a welcoming read for everybody to understand how wrong they are. It is in fact the perfect companion book to Hans Rosling's "Factfulness".

Bobby Duffy is head of one of the world's leading opinion-polling agencies, which one lucky day started - for promotional reasons - to conduct studies on political thinking and reality. Now, decades later, the agency has conducted their surveys around the world, allowing them to compare countries, trends over time, and of course of perceptions by common people completely differ from the actual reality of the country.

Whether the topic is health, money, immigration, religion ... or even less emotional topics such as internet access, public perceptions are almost always completely off the mark, and not by a short distance, but a very large margin in most countries.

This book is an essential read for anybody in politics, public affairs and journalism. It demonstrates the extreme dangers of referendums, because the average population does not have a clue about reality. They don't. It explains why populism has such an easy task of exploiting these misperceptions and use them to advance their evil cause. It explains a lot of the anger and the fear among populations, two emotions that are often misdirected, but they relate more about people's perceptions than about reality. To put it differently, people seem to be afraid of their perceptions rather than from reality. 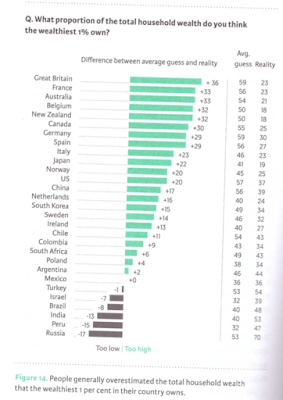