As an avid reader, I have come across several books that bring the spirit of jazz to live. Many others have used jazz as backdrop for their plots, with Haruki Murakami, who once owned a jazz pub, as the most notable one, but also thriller author Steve Hamilton and a few other ones.

Yet there are three novels in which jazz is at the center of the story, with Michael Ondaatje's "Coming Through Slaughter" as my favorite.

Michael Ondaatje is possibly best known for his award-winning novel "The English Patient", a book that is ten times better than the movie, and an absolutely fantastic read. Ondaatje is a language virtuoso, with a lyrical style that is at the same time intricate and easy to read.

In "Coming Through Slaughter" he tells the story of Buddy Bolden, the cornet player who started jazz in the early 20th Century in New Orleans. Little is known about Bolden's life, or about his music. He suffered from schizophrenia, and was collocated in a mental institution at a relatively young age.

In this wonderful novel, Ondaatje tells Bolden's story through the perspective of the people who were closest to him, as if they were they are delivering witness accounts of what was taking place. Each person, whether his friend the photographer Bellocq, or Cornish the trombone player, or his wife, talks with his or her own voice, alternated with scraps of other material that could shed light on the musician. The result is a patch-work of carefully crafted texts that not only re-create Bolden, but the whole atmosphere and context of turn of the century New Orleans, with its music and its nightlife.

The novel is an absolute delight. A must-read for jazz fans.

It is said that Bolden was the first to merge blues with ragtime and gospel. Here is Ondaatje's descriptive of this, through a testimony of one of the other characters:

"I'm sort of scared because I know the Lord don't like that mixing the Devil's music with His music. But I still listen because the music sounds so strange and I guess I'm hypnotised. (...) The picture kept changing with the music. It sounded like a battle between the Good Lord and the Devil. Something tells me to listen and see who wins. If Bolden stops on the hymn, the Good Lord wins. If he stops on the blues, the Devil wins."

In the marching band he was playing in, Bolden starts doing his own thing while spotting a girl on the sidewalk who reacts to his music.

"March is slowing to a stop and as it floats down slow to thump I take off and wail long notes jerking the squawk into the end of them to form a new beat, have to trust them all as I close my eyes, know the others are silent, throw the notes off the walls of people, the iron lines, so pure and sure bringing the howl down to the floor and letting in the light and the girl is alone now mirroring my throat in her lonely tired dance, the street silent but for us her tired breath I can hear for she's near me as I go round and round in the center of Liberty-Iberville connect. (continuing further for another page like this) my heart is at my throat hitting slow pure notes into the shimmy dance of victory, hair toss victory, a local strut, yes meeting sweat down her chin arms out in final exercise pain, take on the last long squawk and letting it cough and climb to spear her all those watching like a javelin through the brain and down into the stomach, feel the blood that is real move up bringing fresh energy in its suitcase, it comes up flooding past my heart in a mad parade, it is coming through my teeth, it is into the cornet, god can't stop god can't stop it can't stop the air the red force coming up can't remove it from my mouth, no intake gasp, so deep blooming it up god I can't choke it the music still pounding a roughness I've never hit, watch it listen it listen it, can't see I CAN'T SEE. Air floating through the blood to girl red hitting the blind spot I can feel others running, the silence of the crowd, can't see".

Ornette Coleman (was it him?) once said that "writing about music is like dancing about architecture", yet some of us, and Ondaatje in the first place, manage to come close to evoking it.

Irish novelist Roddy Doyle is the master of the long and funny dialogues, taken from real life. Usually he sticks to the common man in Ireland, and many of his novels are really worth reading, such as "Paddy Clarke, Ha Ha Ha", "The Barrytown Trilogy", and "Snapper". To the general public he is possibly best known from the movie "The Commitments", in which a young band becomes the Irish replica of James Brown's music.

In this novel, Irish immigrant Henry Smart arrives in New York, gets involved in some mob troubles and has to flee to Chicago, where he meets no one less than Louis Armstrong, who is turned into a fictional character here, and is even involved in a burglary together with Smart. As in all Doyle's stories, "Oh, Play That Thing" is about the common man trying to make a living, making ends meet in a society whether nothing is given for free. And with no skills or education, they end up in the world of speakeasies, bootleggers and criminals.


The story is rambunctuous, fun and told with the energy and dynamic power we know from Doyle. Whatever stupidities they're up to, you cannot but feel a deep sympathy for the humanity of the characters.

Here is a short description of Armstrong's playing.

"The names danced among the crazy lights that jumped from the mirror ball above the dance floor. He was dancing now as he played, as if his legs were tied to the notes that jumped from the bell of his horn. His steps were crazy but he was in control. He was puppet and master, god and disciple, a one-man band in perfect step with the other players surrounding him. His lips were bleeding - I saw drops fall like notes to his patent leather shoes - but he was the happiest man on earth."

"Twelve Bar Blues" tells a story that spans several generations, but its key character is "Lick" Holden, cornet player from New Orleans, and a contemporary of Lous Armstrong. It is an epic tale about jazz music, about African American culture and racism, about passion and love.

Even though it is not literature with a big "L", it is wildly entertaining and it creates characters and conjures up an entire world that are highly plausible and fun.

Now, Michael Ondaatje is from Sri Lanka and lives in Canada, Roddy Doyle is from Ireland, Patrick Neate from the UK. I may have missed something, but where is the great American jazz novel?

This is the first review that I post on my blog on Jazz CD Reviews and on Literature Reviews, the latter less popular because only in Dutch, but I will change that.
Posted by Stef at 12:37 AM 2 comments:

"Tinkers" wond the Pulitzer Prize, not a small feat and rightly so. This relatively short novel - only 190 pages - is a pretty unique achievement, defying traditional forms you would expect for a novel.

The plot is simple and consists of two threads. One a the beginning of last century, telling the story of an epileptic man, Howard, trying to survive with wife and children by peddling from village to village. The second is about his son George, lying on his deathbed in his old age, surrrounded by his family.

Howard's epileptic spells give him visions of the world that are more acute, and possibly give some insights in what lies behind reality. George was a clock-maker, knowing the mechanisms behind time, its subtleties and intricacies.

Harding not delves into the depths of human existence, but adds a world of language that goes beyond the rational and descriptive, conjuring up images that present reality differently, less familiar but more adequate and full of the emotional wonder it has that goes beyond the explicable, whether it's about nature, about feelings, about relationships or about life itself. His prose is lyrical and eloquent, mythical and mistifying. It is not always easy to read : you need to take your time and experience the text rather than just read it. In that sense, it's really comparable to good music.

This is poetry in a prose format. This is music in words. 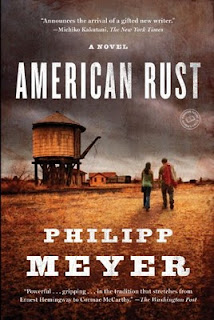 This is a novel I can only recommend. Seldom have I read a novel in which all characters are so real, alive and human. The context is the industrial decline of Pennsylvania, the lack of perspectives for its inhabitants, which go together with a kind of resignation for some : why study? why look for work? and departure for others because the future is elsewhere.

That's the backdrop for this story, which is in essence about values. First of all moral values. About justice, about right and wrong, about culpability and responsibility. Those are set against family values : full support despite everything, or acceptance for opportunistic reasons.

Despite the bleak economic background and the heavy themes, the novel is one of the most pleasurable you will read in a long time, not only because of the variety of styles in which the different characters tell their story and the events that take place, but also because it is so absolutely vibrant with life, in every sentence and paragraph, making you want to read on and on and on.

In the beginning of the story, Isaac English, a brainy kid kills a bum, and runs away from home in order to avoid the consequences. This sets in motion a series of events and stories, each told from the perspective of the other key protagonists: his best friend Billy Poe, his sister, the sheriff, ...

The style, the structure, the plot, the depth and the clarity of the world created, the different layers of meaning, the entertainment factor, all make this one of the best books you will probably read in years.

With his debut novel, Meyer earned himself a place among the great American novelists.